It's winter in Maine... This is the time of year that some Mainers get antsy. "Come on Spring! Enough is enough!"  Things like that...
Honestly.. it sort of drives me crazy.  I mean... it IS only February. We Do live in the most Northeastern State of the U.S. Snow sports and recreation are a huge part of Maine's tourism industry and there are numerous businesses that rely on snowy weather to put meals on their table in July.
Besides, quitcha belly achin..... I think my Dad used to say something along those lines. Or maybe, it was Mom. Either way, there was low tolerance for whining and complaining around my house.
I know it can be cold, I know it can be windy and harsh, I know shoveling can be hard and driving is slower... but really.... there are also 101 fun things to do in the snow. So go do them. :)
Last weekend, we did just that.  ( Well.. we do it every weekend but last weekend was particularly snowy and particularly fun.) A few little shots of my gang. 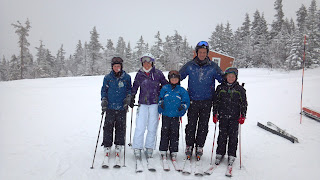 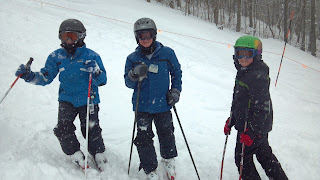 I decided to break the mold of my typical Tri Season and sign up for some EARLY early season races. Hmm.... I'm starting to wonder what I was 'on' when I decided that.
Because... it's the EVE of March 1st. And, California's 70.3 Athlete Guide arrived a few days ago.
= Heart palpitations!!!! seriously.. my heart skipped a few beats.

Otherwise... training is going well. Better each week... step by step. I have bad workouts sprinkled in there but overall, I'm feeling stronger on the bike, faster on the roads with less effort and in the pool.... not too bad.  It's coming along. I need to keep the faith, remember where I've been and have confidence in what I can do. 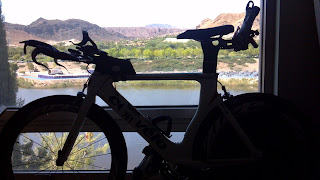 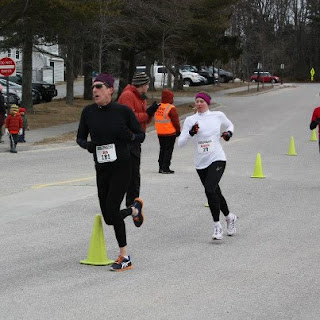 Hmm...
It can be a trick. Sure, there are many things I am dealing with physically that make each year harder than the last. But mentally.. it's an ongoing game. A battle...

A few more things go along with that. Those are my light hearted benign thoughts.  I had another post written ( in my head, I store a lot of them up there that never see print) about getting 'old ' and getting real.
Onward!

Today's Race Report---
The Cape 10 miler. That's what I always called it.  It's actually Maine Running Company's MidWinter Classic.  Or something like that....

I started running this race a LONG time ago. That's why I call it the Cape 10 miler... I think it used to be called that. I ran it back in college... or right after college at least. ( I haven't done it Every year since... but many of them for sure. ) My Mother and I ran it together one time. We have pictures somewhere and have laughed at our old school running gear. I know at least one of those years I wore a GIANT cotton sweatshirt that would fit my husband. So glad all that has changed.  Although I did see a kid wearing a 'wool' sweater today... ? He was ahead of us though!

I can't remember ever going into this race feeling confident and sure that I was ready to run the goal race pace I had decided on.
It can be a tough time of year to run fast! My race season typically ends late fall, I take a break and then ease back into training.
This year isn't all that different except I am racing a Half Ironman in two months. Less than two months actually. (gulp...)
That means I have been training and I was ready to run 10 miles today.  But I still lacked 100% confidence in my speed for that distance. During training runs, doing 5 min at my goal pace threw me into a tizzy. 3 x 5 min and I was ready to cry mercy.  But.... yesterday I ran a bit and the pace felt easy peasy... my easy pace was faster....  ok... game on. Let's go after this.

My goal was to break 1:09. Just because I like breaking big numbers like that. A few years ago, I broke 1:10 for the first time.  Last year, somehow, I knocked it down to 1:09:32 by chasing my husband Mark the whole way.  2012 was a PR that I was happy with except, I absolutely crumbled physically and mentally during the last few  miles last year. It was pathetic. Sure, a PR, and at the end of the day, I am always always happy with that.  Yet I was determined to run this race smarter. And, faster.

Mile 1 was easy and fast since it's mostly downhill. I didn't hammer, I was in control, but... I was NOT about to let two ladies I race Tris with get too far from my sight. I could tell they felt smooth and relaxed... oh oh.. I had my work cut out for me!

Mile 2-3 is more interesting with the "Spurwink Hills."  I trained in High School with my XC team on these hills. I remember Mr. Jackson standing on the top yelling to us.. "pump your arms!!"  Those hills were enormous back then.   But now, I live in the Foothills of Western Maine and those hills have shrunk. Thankfully... since there are 3 in a row and they are part of this race course!!

SO up and over we went... quick "spinning" up the hills as Coach Doug advised and then lay down the  power/ strength to get up and over....  6:58 and 6:51 for those two miles.  Mark was right there. But, this year, unlike the last several. I felt like I had the edge on him. ( not that I cared too much if I beat him or not.. but it's how I was gauging myself & how my day was going.

The next mile is flat for a while with a climb up to mile 5. I felt hot!!  I was overdressed. I would Absolutely be throwing my top later to my family when I saw them. 6:47 for  mile 4 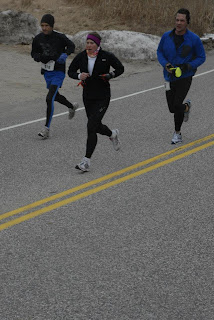 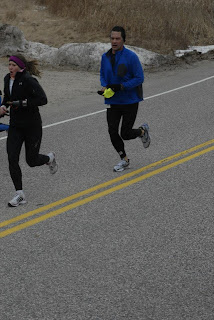 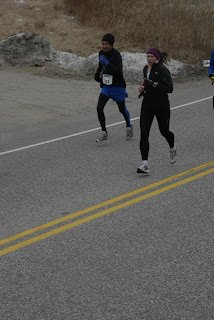 Up the hill to  mile 5.. running AWAY if I could from the guy behind me Slapping his feet on the ground. It was driving Mark and I nuts. He sounded like he was wearing flip flops. Funny how sounds are amplified when running in races like that.  Finally found the 1/2 way water stop, grabbed a cup since I had just sucked down a gel, and kept truckin'... Mark and I ... step for step.  6:45 for mile 5 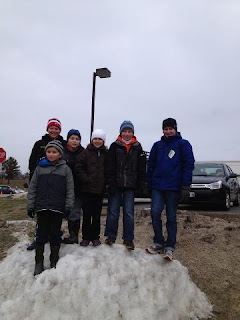 I high fived as many as I could  and made the possible error to throw my jacket and neck warmer. The wind was whipping and my arms that were sweaty under the coat, froze in the air. C'est la vie.. not much I could do! Run faster.... that would get me to warmth sooner.

We are running on a long "deceiving" road by Crescent Beach now... if you drive it, you think it's basically flat or at least downhill. NOPE! It's not. And, when racing a 10 mile race, you feel every little grade. Trust me. The wind was whipping and cold. This race has Certainly seen colder temps and harsher conditions but it was cold out there today. My face was Frozen. And, I had a look on too. I could feel it. I was gritting my teeth. I was squinting my eyes. I was watching my Ave pace like a hawk. To go sub 1:09 I needed an average no more than 6:54.

Tell the brain & tell the body you feel good or... or else. ( Did I actually feel Good?? Hellno! I was digging as deep as I could, I was frozen, my left hamstring hurt, my calf was twinging, I was Tired! My face was Frozen! I was at my Max HR  of 188 and there wasn't anything I wanted to do more than stop running. BUT!  I had TWO more miles to race!!! So no whining allowed!!!!! )

My teeth were clenched. I was in don't give up now mode. Nothing was going through my brain other than my fight words. ( sorry.. I keep those to myself. :) )
I hurt. But I wasn't going to miss out on this goal by two seconds! Nope.. not today.
I admit.. there was a minute or two in there that I thought, "Ok, if I drop my pace a bit too much I will Still PR... I am on my way to at Least a low 1:09! and that is Great!! A PR!" But quickly smacked myself back to , "Stop it! You WANT this 1:08! DO IT! NO excuses!"
Mile 9  6:56
Mark was behind me now. He was close but I was edging him out this year. I can't remember the last time I beat him at this race. Yay... :) I admit, this made me smile. If he was 6 sec ahead of me, that would be totally fine too. But Nick ran up after the race and said, "Who won? Mommy or Daddy?"  I kind of liked hearing, "Mommy." I know.. I'm bad. I never said I wasn't competitive. And, Mark is at peace with that. Thankfully.

I pushed SO HARD right to that finish line. I was razor sharp focused today and being able to do that, felt amazing and rewarding. After struggling with this at my last big race, I found great comfort and happiness knowing  I could dig to that place once again. I finished up with a 6:49
and squeezed out a 1:08:49.  (1st age group, 8th woman OA)

This is all I need to kick of 2013 on the right note and head to Oceanside 70.3 with new confidence and excitement! 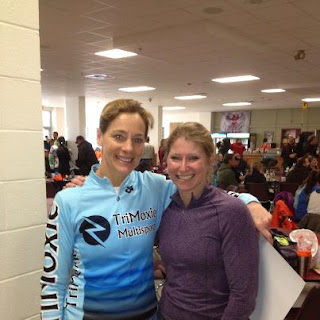 Here I am with Rockstar TriMoxie Athlete Kim Cole who took 2nd in her 55-60yr age group today!!!! 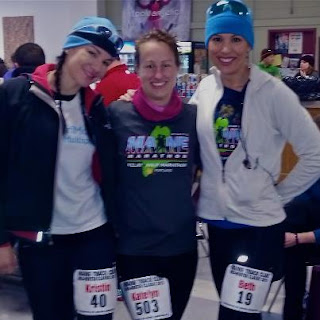