As we sat at the dinner table tonight talking through various issues, one of my kids was reminded of something in his past and begged us (ha..no begging needed) to watch old movies from when they were little. (smile here....while they're growing by the minute, they're still our little guys..) We pulled out the videos and settled in. Mark randomly grabbed a tape and we were whisked back to the past. What started playing? The day Nick came home from the hospital. March 21st. Does that mean something? I don't know. But today is March 21st. Pretty stunning to sit on the couch with my 3 boys...now 10, 8 and 6 and watch their little tiny faces and voices fill the screen from exactly 6 years ago today. I should have a picture to post here of them at that age. But I am not taking the time right now to find one and scan it. I'll get to that later. But here are my sweet hearts now. Watching them grow before my eyes always makes me stop, take a breath, and appreciate what I have going on here. 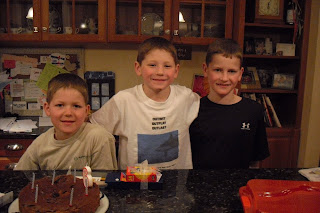 That seems like a good segue into some of that events that have been distracting me lately. Clearly, I haven't been blogging!
Nicholas turned 6 a few weeks ago... We had a fun birthday weekend for him. My kids didn't enter this world quietly......each one had their own wild and crazy and rather scary story. Nick was a preemie. He was born ~6 weeks early via emergency c-section. I am certain we had an angel looking down on us the day he was born. It's a long story. Let's just say I never forget how lucky we are to have this healthy little boy running around us each day. We celebrated with friends and family with a Dragon Party. Below is my attempt at a dragon cake. I think I did alright! Even my kids were impressed and little Nick himself admitted he was surprised I did it! (I have failed at a few other attempts in the past.) 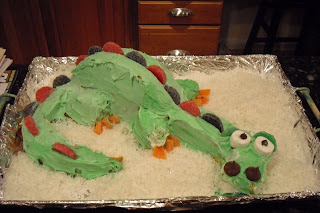 Meanwhile...I was training hard. Right now, I can't for the life of me remember any of the workouts. I just know that for 3 weeks my volume and intensity picked up and I loved it. But my legs and body were definately ready for a break. The last big workout before my rest week was a 1:45 run. It was fantastic. It was remarkable really. When I thought about that run the night before, I couldn't imagine how my legs would hold up. How they could possibly get me Up over the hills. Instead, I felt like I was walking on air. My legs were so strong. I had one of the easiest long runs I can remember. I loved it.
Tuesday of last week, my husband said Adios to all of us and hopped in his little Cessna 185 and departed to Florida. We are in Maine. He was flying to Florida...in his little plane. Let's just say I was a little on edge that day. I stayed very busy all day and before I knew it, he was there. He had a tail wind and sunny skies. It took him 3 of 4 legs and he landed by 5:30 p.m. I was relieved and ready to tackle the week.
It was not a quiet week in my house. First up: ST. PATRICK'S DAY!!!!!
I'm curious to know if this was a major holiday in anyone else's house. Yes, we are Irish. But this is not why it was such an event. You see...back in preschool, my kid's teacher had them all construct Leprechaun traps. Somehow, they even caught the little buggers. I think they had little statues. But when the kids went out to play, they ran away. Not sure. I really need to call Shirli (their old teacher) and ask. Because you see, my kids are STILL On a mission (and I mean Mission!) to Catch a leprechaun. We have always dropped food coloring in their milk and pretneded they jumped in. We've made green pancakes. You name it. The Irish mischief makers stteal gold out of their traps, leave glitter footprints around teh house, you name it. But it is Not enough. Especially for Tommy, he vows that next year is the year. He will create the world's best trap and it will Happen next year! Deep sigh...I need to come up with something.
That little game took up a bunch of Wednesday.
This is a splotch of green that was left behind by a leprechaun in one of the kid's traps. 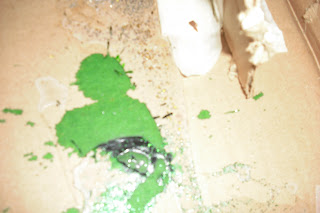 And a note written by Tommy-- he left a gem as a lure. 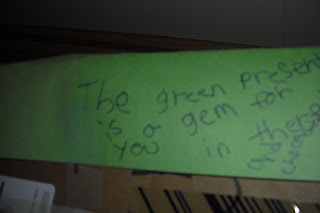 So much more happened last week. I hurried around and missed my husband day after day. I have a story about some fitness testing and a lactate threshold run test I had done but I think I will write about that tomorrow. Rest week is over now...and I have a swim at 5 a.m. So this post needs to end so I can get ready for bed.
Mark arrived home last night and our family is happily together again. For 3 days.
Now it's My Turn!!! My plane departs from Boston on Wednesday afternoon and I'll fly of to Traning camp in Tuscon, Arizona!! I'm not a big fan of travelling so far alone but I am super excited to arrive there, meet Jen, the other campers and have a fun weekend with my friend Mary.

Oh I LOVE the leprachaun traps and clues to the sitings!! How cool! Can't wait til Moana is old enough to try to catch one. :)
have a great weekend at camp! Wish I could be there with you guys!

We made traps too, the kids loved it! Camp sounds like fun, enjoy and learn a ton!

Noah is convinced there are leprechauns, and he made a few traps, but I am not so creative as to have left a green splotch! That's awesome! :) Jordan, naturally, has tried to disabuse the younger two of their naive beliefs... :(
I do love that dragon cake! I want to hear about the fitness testing!! cool!

My mom once planted green lollipops around a tree in our yard, so when we woke up St. Patrick's morning they were there. Love the glitter footprints idea.

I love the pic of your boys! My boys are 4 1/2 and 2 1/2 and I'm still wondering where the time went. It seems like just yesterday that they were babies.

The tri camp sounds like so much fun! I hope you have a great time, and I can't wait to hear all about it!

SEE YOU SOON!
I have never ever heard of doing anything for St. Patty's day...for the kids. Then, I was walking home from school with Morgan (who is 8) and she said, 'Is there such things as leprachauns mom?' Morgan said that some of her friends has visits from leprachuans over night? WHAT????? BAD MOMMY.

I told her no. They are not real.

But, seriously? I can only manage the tooth fairy, santa clause and the easter bunny....the leprachauns would put me over the edge. lol

Great post, Ange! Have a super trip. It's something you'll remember for a very long time.

I love the st patty's day ideas... and how creative with the cake!! wow, i have never done that I guess I am just too lazy. Enjoy the camp in AZ!!

your boys are so friggin cute. have a blast in tuscan!

What a great cake!!! Hope you have fun at camp!

The cake is great! Nicely done! My son is 4 and has not gotten the leprachaun "bug" yet. Not sure if I look forward to all of that, seems like a lot of extra work! Yes, let us know about the fitness test and how you came in the 99% percentile:)

Have a super trip! Take some pictures for us! And RELAX, you've done the work, now go enjoy it.